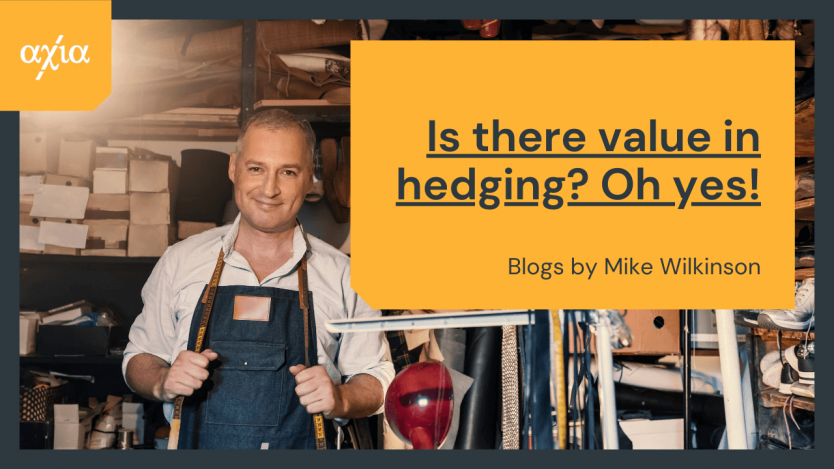 About 15 or 16 years ago, we were living in an old farmhouse in the middle of the beautiful Suffolk countryside. Around the farm was a hedge, probably around 2 or 300 yards in total, which clearly hadn’t seen a cut in some time. As a result, the whole place looked a little untidy. Time for action, I was told. The following day, I happened to be in the local village when I saw a van drive past with “Garden Maintenance, Hedge Cutting” on the side. Perfect, I thought, making a note of the phone number.

Later that day, I gave them a call and asked them to visit and give me a price. After wandering around and looking at the hedge, the guy who came to see me said he’d get back with a quote.

Sure enough, a few days later, his quote arrived. You should know that by now the pressure to get the hedges sorted out was growing (and so were the hedges) – my wife was well and truly on the case! Excitedly ripping open the envelope, I checked out his quote. I think the colour must have drained from my face as my wife asked, “What’s the matter?” I slipped the quote across the table. I wasn’t sure whether I was just plain angry or utterly bemused. The colour drained from her face as well, so it wasn’t just me!

The quote was £1,000. For cutting back a hedge! When I had calmed down, I rang him back and asked what he thought he was going to be doing – cutting it with nail scissors perhaps? After some blustering and my explaining that I just wanted someone to come in with a large hedge cutter, cut the hedge and clear up, he agreed to amend his quote. A few days later and his amended quote arrived – for £600.

The high cost of country living?

I was beginning to think that living in the country was going to be a good deal more expensive than I had imagined. Even at £600, the price seemed outrageous to me (but then I didn’t really have much to compare it with). Finally, I thought it might be sensible to have a word with my next-door neighbour (around 1/4 mile away) and see what he did.

Some background research (at last).

“That seems an awful lot,” David said when I told him of my two quotes. “I use Ted, the local farmer. Give him a call; he’s only down the road.”

So, I rang Ted and he duly came to visit. Now, Ted was a typical farmer. We walked across the fields together, wandered around the hedges, looked into the ditches, all punctuated with the occasional “Hmm” and slight intakes of breath. At the end of it, we were leaning against one of the gates to discuss the business end of the conversation.

“Well, you don’t just need the hedges cut, it’ll all need ditching too.” Oh dear, I could see the price rising again before my very eyes. “The whole job will probably take a little while, to do it properly.”

“Goodness. Really? Well roughly, how much do you think it would be?” By now I was getting concerned. The original £1,000 was miles out, I was sure, but £600 was beginning to seem more likely – and at least once a year!

And now the price…

Ted gave the whole project further considerable thought, having another quick wander. Looking serious, he walked back to me across the field. “Well,” he said, “I really couldn’t do it for less than…

Frankly, I was amazed. How could the same job move from £1,000 to £30? Surely, my £30 job was going to be a disaster? It wasn’t. He did a fantastic job and by the time Ted had finished, the whole outlook had been transformed and he had one very satisfied customer. For £30. Just £30.

And I got to wondering whether he could have got more (of course he could). This was serious money left on the table. If only he’d just asked, “What have you been quoted up to now?”

Ted is now retired, so I had to find someone else to do my hedges – nothing like as well as Ted and at the crippling price of £60. He would have found it a bit more difficult to get more. After all, he was asking for twice as much as I had been paying!

No comments to show.

We use cookies on our website to give you the most relevant experience by remembering your preferences and repeat visits. By clicking “Accept All”, you consent to the use of ALL the cookies. However, you may visit "Cookie Settings" to provide a controlled consent.
Cookie SettingsAccept All
Manage consent

This website uses cookies to improve your experience while you navigate through the website. Out of these, the cookies that are categorized as necessary are stored on your browser as they are essential for the working of basic functionalities of the website. We also use third-party cookies that help us analyze and understand how you use this website. These cookies will be stored in your browser only with your consent. You also have the option to opt-out of these cookies. But opting out of some of these cookies may affect your browsing experience.
Necessary Always Enabled
Necessary cookies are absolutely essential for the website to function properly. These cookies ensure basic functionalities and security features of the website, anonymously.
Functional
Functional cookies help to perform certain functionalities like sharing the content of the website on social media platforms, collect feedbacks, and other third-party features.
Performance
Performance cookies are used to understand and analyze the key performance indexes of the website which helps in delivering a better user experience for the visitors.
Analytics
Analytical cookies are used to understand how visitors interact with the website. These cookies help provide information on metrics the number of visitors, bounce rate, traffic source, etc.
Advertisement
Advertisement cookies are used to provide visitors with relevant ads and marketing campaigns. These cookies track visitors across websites and collect information to provide customized ads.
Others
Other uncategorized cookies are those that are being analyzed and have not been classified into a category as yet.
SAVE & ACCEPT